Angono is widely recognized as the cultural heart of the Philippines. In every corner of Angono, you'll find evidence of the city's artistic heritage, making it a prime tourist destination. The streets themselves are works of beauty. As soon as you reach there, you will be able to observe this for yourself, particularly in the street art that can be seen around the town hall, the Blanco Family Museum, the Botong Francisco Museum, the Nemiranda Arthouse, and the Atelier Museum.

A Look at the Past: Angono’s Brief History

Formerly a barrio of Binangonan; established as a pueblo in 1766 and elevated to municipality status in 1935 by virtue of Executive Order 158, issued by then-President Manuel L. Quezon and taking effect on January 1, 1935. Was considered to be the birthplace of mythological creatures such as nuno and sirena, highlighting the town's rich history and culture. 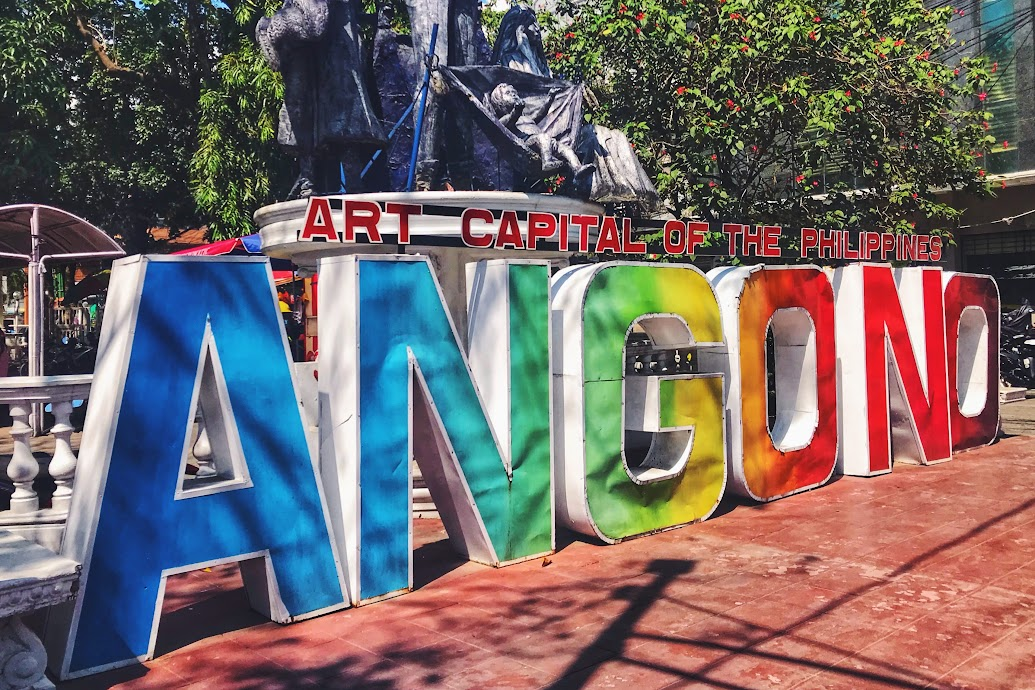 Image from Jay To The World

Originally, the name "Angono" was associated with "Ang Nuno," a little, long-bearded guy who was claimed to have lived in the ancient balete tree in the poblacion of the town. It is home to the first known piece of art in the Philippines, the Angono Petroglyphs. The birthplace of two renowned Filipino National Artists, Carlos "Botong" V. Francisco and Maestro Lucio D. San Pedro, respectively National Artists for Visual Arts and Music.

Why is Angono Called the “Art Capital of the Philippines”?

Angono continues to live up to its reputation as the Art Capital of the Philippines, as it is teeming with notable artworks, exceptional talents, and more. The city is loaded with museums and galleries displaying stunning paintings and sculptures, and the streets are filled with murals paying respect to the local artists that call the city home.

6 Unique Facts About the Art Capital of the Philippines

Here are six unique facts you're missing out on if you haven’t done much research on the Art Capital of the Philippines:

It’s Home to the Oldest Artwork in the Philippines 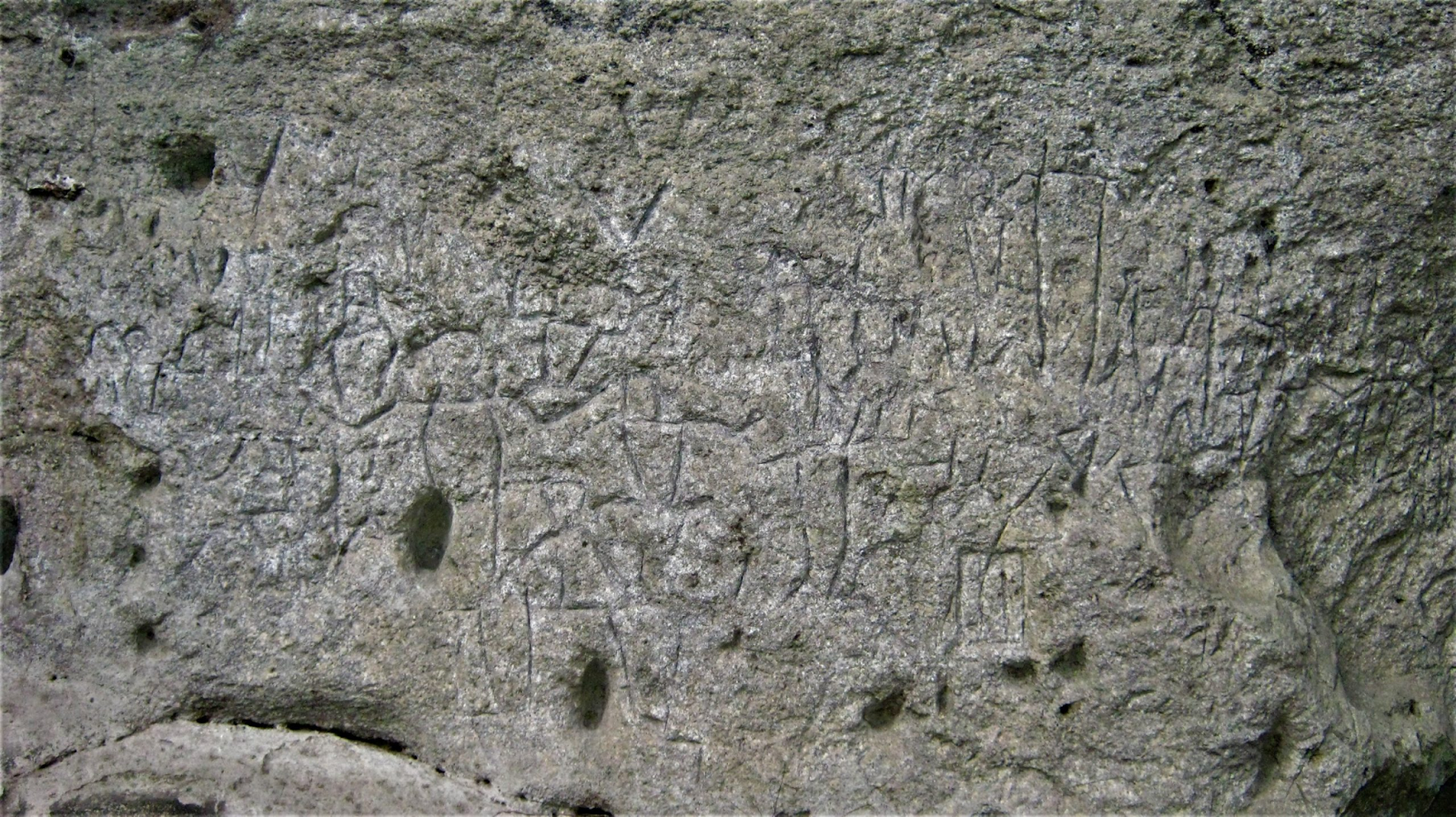 Image from The National Museum

It's only logical that the country's oldest known work of art would be found in Angono, given the city's strong creative inclination. The 127 petroglyphs known as the Angono-Binangonan are stylized depictions of animals and stick figures believed to have medicinal and magical abilities. This rock art from the late Neolithic period has been recognized as a National Cultural Treasure.

It Has One of the Best Sunsets 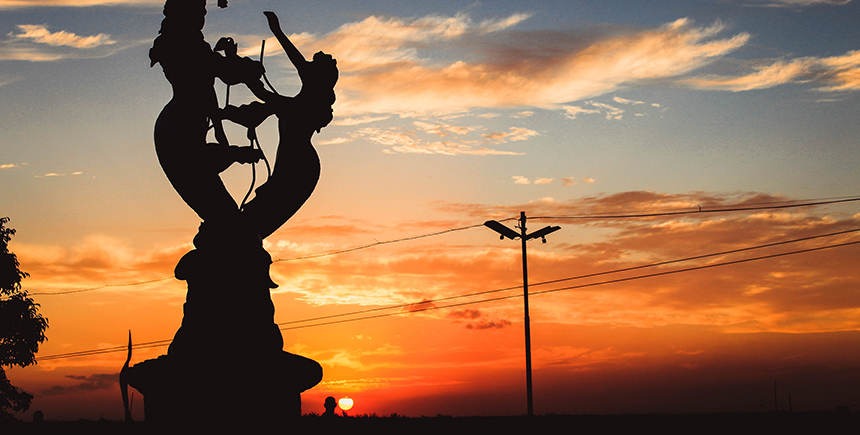 Lakeside Park is a popular destination for residents of Angono at the end of the day, where they may relax in peace while taking in the scenery of Laguna Lake and the distant cityscapes. Lakeside Park, often known as "Wawa" by the neighborhood residents, is the ideal location for unwinding and socializing with friends. The park is home to a children's playground, an iconic mermaid statue (of course), a variety of food vendors, bicycle and jogging lanes, and a boat ride service that travels across Laguna Lake. There is also a zipline for you to enjoy! On the other hand, Lakeside Park is the place to go if you have a soft spot in your heart for beautiful sunsets. Angono's artistic locals have always found a lot of motivation in the city's riot of colors, so it's no surprise that the city is known for its creative output.

The Food Is a Must-Try 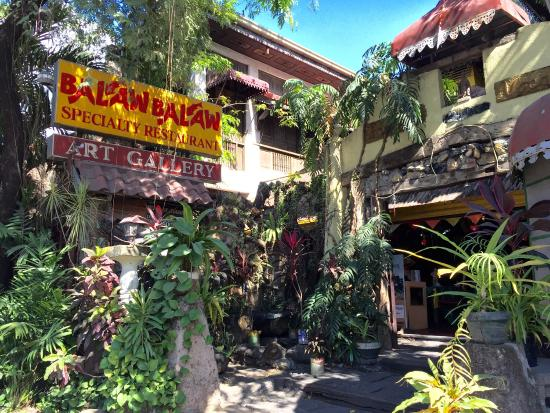 Angono’s delicacies are nothing short of creative. The golden-brown fried itik is very popular not only among locals but also with tourists. Kumanoy, also known as kakanin, is a popular delicacy. But the art capital offers something beyond the common food trip. In Balaw-Balaw Restaurant, guests are presented a menu of both Filipino dishes and exotic delicacies such as the eponymous "balaw-balaw," a dish made of fermented rice and shrimp, adobong uok, pritong palaka, pritong hantik, "cow-butt-and-balls soup," and other bizarre selections. 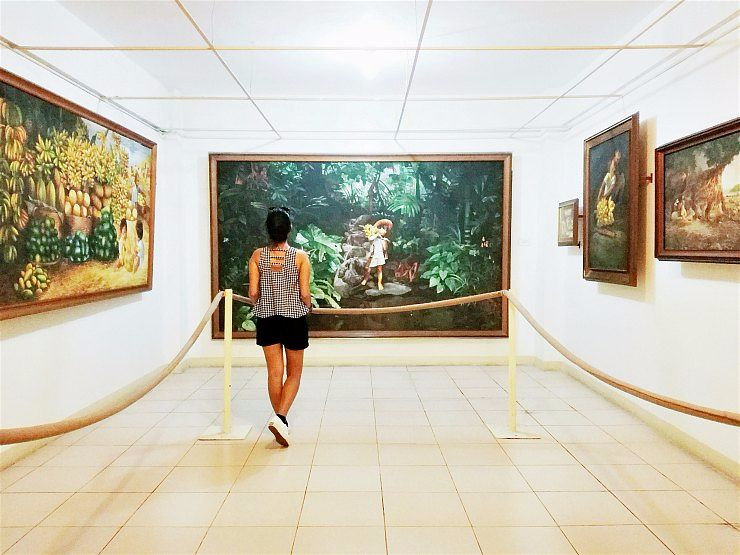 Image from Point and Shoot + Wanderlust

There is a reason why Angono is known as the Capital of Art. Angono is home to a number of well-known and up-and-coming young visual artists, and the neighborhood also has a number of art homes. There is a museum called the Blanco Family Museum that showcases the artwork of Pitok Blanco and the other artists in his family. The Carlos "Botong" Francisco Second Gallery gives a look into the early life of the Angono-born National Artist. Meanwhile, Nemiranda Art House and Balaw-balaw both function as galleries and restaurants.

If you are interested in trying your hand at painting, you should go to the personal gallery of the well-known musician and trans-media artist Orville Tiamson for a session of "Art Jam," which is a method of visualizing with the assistance of music. Nani Reyes, a well-known cubist and realism artist, welcomes guests to his workshop as well.

There Are Street Galleries in Angono 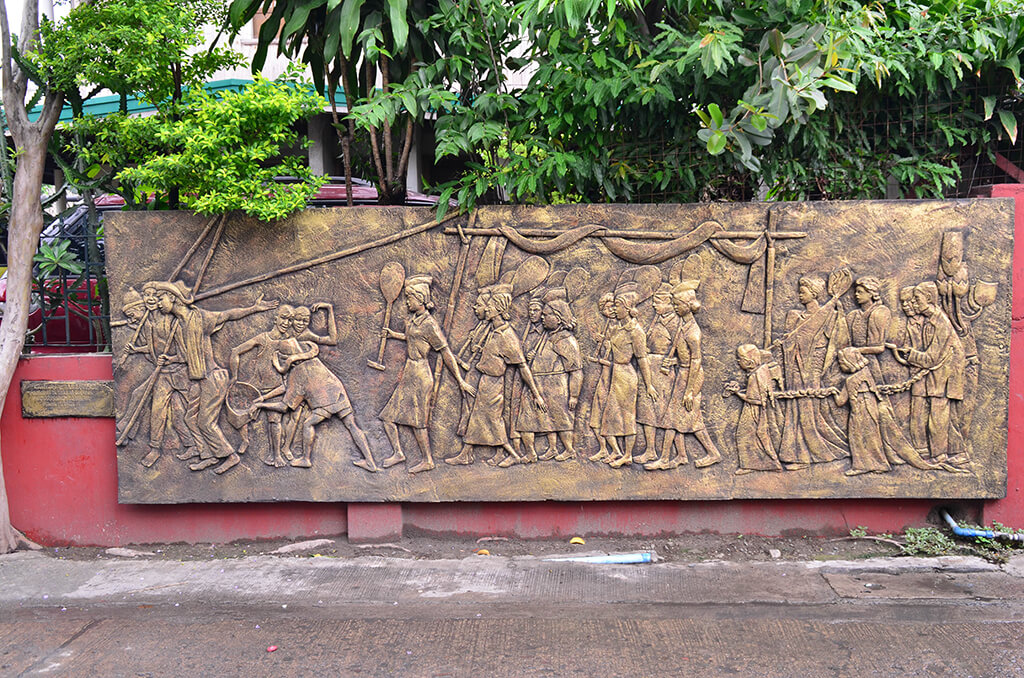 In Angono, art is not limited to galleries and museums; it can be found everywhere. In this city, life-like sculptures are hidden in every corner. The truth, as well as the talent of local sculptors, is on exhibit in the Street Gallery in Doa Aurora. Botong's most notable pieces of art are carved into the boulevard's walls. On the opposite side of Saint Clement Parish lies the ancestral house of Lucio San Pedro, another Angono National Artist.

It’s Home to the Higantes Festival 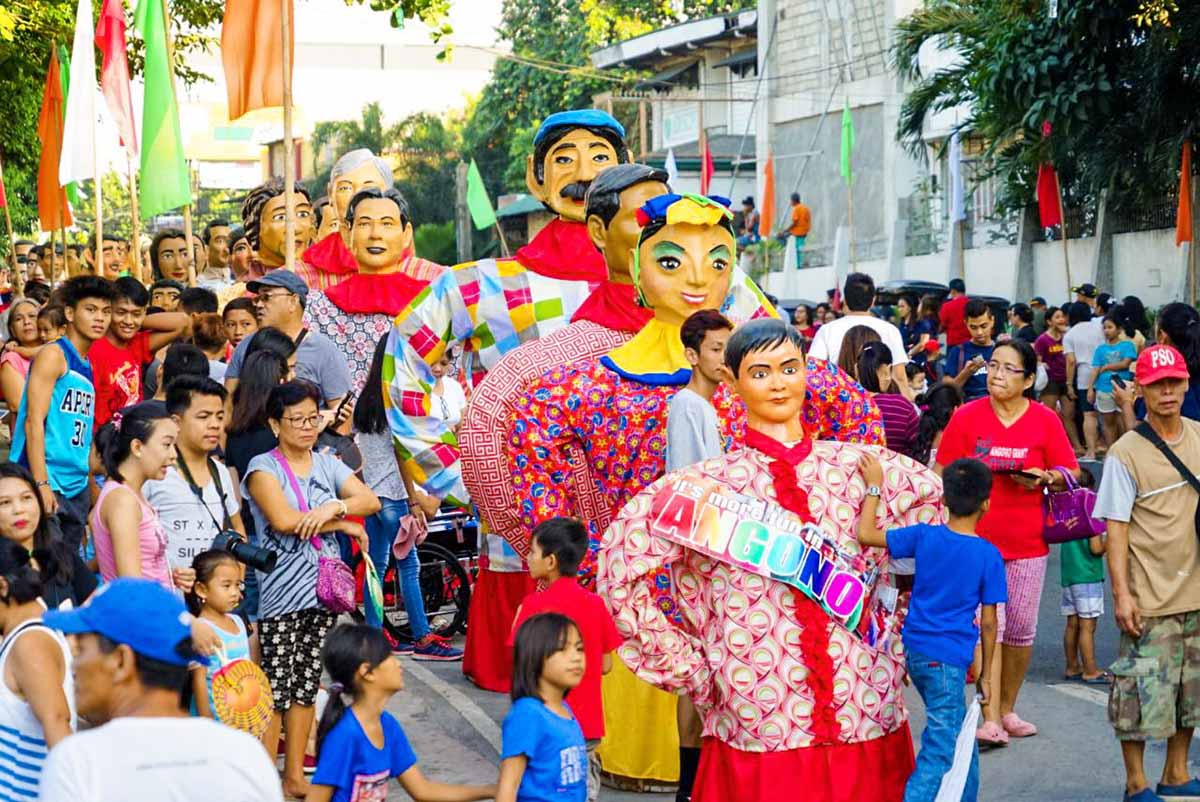 Angono's identity may be best represented by the higante. When Angono was still a village, it was used to point and laugh at the cruel Spanish hacienderos; now, it's a symbol of the resourcefulness of the residents.

Fiberglass has replaced papier-mache in the higante, making it more durable and detailed than ever before.

The town is filled with higanes, from the large one in front of city hall to the little souvenirs. At the Higantes Festival in November, the surviving Higantes march in procession. It's necessary that every single Filipino see these giants march and take pictures with them.

The little village of Angono is located around two hours and fifteen minutes by located to the east of Manila. This village may be little, but the creative spirit of its residents is big. Angono is a great place to visit this year since there are so many exciting opportunities waiting for you there. You may enjoy the several excellent eateries and exciting activities right in the town. The city's festivals, its products, and the people that make it special are what make it sparkle. The city of Angono has been recognized as "The Art Capital of the Philippines." It takes pride in its vibrant culture and traditions, as well as its legacy of producing several internationally renowned artists.

Experience the city's artistic center and get insight into Angono's rich history and cultural significance. You may get a good sense of the city's thriving art culture by going to a few different museums, art shows, and art cafés. Therefore, make it a priority to go to the Art Capital, where you may fully enjoy yourself.